William Otero is known throughout the country for his inspired sense of flavor and balance. He combines ingredients from around the globe to create unique and sublime experiences for the palate. 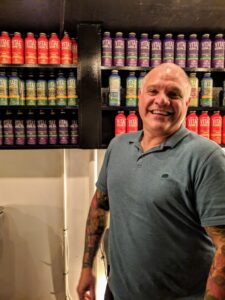 Wil has always worked with food. He got his start when he was eight years old, helping his family of migrant farm workers pick fruit up and down the East Coast, from Michigan to Florida. With seven children, Wil’s mother, Carmen, was—and remains—his guiding light. When Wil was 12 years old, working in the middle of an orange grove, his mother impressed upon him that if he didn’t finish school, migrant farm work would be his life.

Wil took that advice to heart. By the time he was 17 he landed an apprentice position at Walt Disney World in Florida. There, he discovered his passion for food, beverage, and hospitality. Working long hours at Walt Disney World unbeknown to Wil set him up for success. He was no stranger to 12-14 hour days on his feet cooking, blending or preparing for an event at Disney.

After completing his studies, Wil moved to San Francisco in 1993 to pursue a career in hospitality. He spent the next twelve years working in a variety of jobs that, while they contributed many skills and experiences, did little to fulfill Wil’s passion to make a difference.

Again, his mother Carmen served as his inspiration to keep moving forwards by helping Wil to unleash his inner entrepreneur. In 2005, Wil started the Leland Tea Company. Before long, his teahouse became a destination tea spot, earning recognition from the cities of San Francisco and Burlingame, Congresswoman Nancy Pelosi, and many others. Wil earned a devoted following of serious tea drinkers and was invited to create custom tea blends for some of the best-known restaurants in the United States.

In 2016, with Carmen taking over the management of the tea house, Wil turned his attention to his biggest challenge yet: creating a ready-to-drink bottled tea worthy of the demanding sensibilities of true tea lovers. But he wanted to do more! As a child of poverty and obesity, for years Wil struggled with his self-image. But by the time he began to work on this new bottled tea, he had had a breakthrough: “I realized I’m the only one in control of my temple—my body,” he says, “and I will do my best to stay healthy. People love me for the way I treat them and make them feel in my presence, not for the way I look. And I’m ok with that.”

With this new attitude, Wil took up the challenge with gusto. Two years later the unique vitamin-enhanced Vitae Tea is making its entrance into the marketplace. By combining vitamins with full-flavored, complex tea blends, Wil has created a beverage that satisfies the tastes of the most demanding tea drinkers while also contributing directly to their well-being.

“I want to enhance people’s experience by putting out positive energy,” he concludes. “People have a natural sense of peace when experiencing tea, and that’s beautiful.”